Hormones in Plastic and Environment 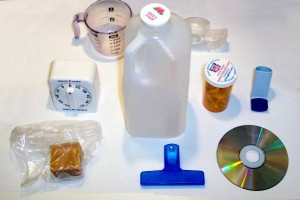 Endocrine disrupters are synthetic substances that, when introduced into the body, either imitate or block the effects of the body’s natural hormones. Naturally-occurring hormones include estrogens, androgens (e.g. testosterone), thyroid hormone, and pancreatic hormones. Therefore, artificial interference with hormone actions prompts concerns about reproductive effects and developmental effects, the body’s ability to regulate metabolism, and the body’s ability to use insulin, among many other possible effects.

A wide range of substances, both natural and man-made, are thought to cause endocrine disruption, including pharmaceuticals, dioxin and dioxin-like compounds, polychlorinated biphenyls, DDT and other pesticides, and plasticizers such as bisphenol A. Endocrine disruptors may be found in many everyday products– including plastic bottles, metal food cans, detergents, flame retardants, food, toys, cosmetics, and pesticides. The NIEHS supports studies to determine whether exposure to endocrine disruptors may result in human health effects including lowered fertility and an increased incidence of endometriosis and some cancers. Research shows that endocrine disruptors may pose the greatest risk during prenatal and early postnatal development when organ and neural systems are forming.

How do endocrine disruptors work?

From animal studies, researchers have learned much about the mechanisms through which endocrine disruptors influence the endocrine system and alter hormonal functions.

When absorbed in the body, an endocrine disruptor can decrease or increase normal hormone levels (left), mimic the body’s natural hormones (middle), or alter the natural production of hormones (right).

What are some examples of endocrine disruptors?

A wide and varied range of substances are thought to cause endocrine disruption. Chemicals that are known endocrine disruptors include diethylstilbestrol (the synethetic estrogen DES), dioxin and dioxin-like compounds, polychlorinated biphenyls (PCBs), DDT, and some other pesticides.

Bisphenol A (BPA) is a chemical produced in large quantities for use primarily in the production of polycarbonate plastics and epoxy resins. It’s a cancer-causing chemical. When fetuses are exposed to it, we now know that it is related to increasing body weight. Also obesity, diabetes, heart disease, immune dysfunction including asthma and allergy, damage to every part of the reproductive system, including uterine fibroids, ovarian cysts in women, breast cancer. In men, low sperm counts, prostate cancer, abnormalities of the urethra that as they age, men can’t urinate normally — a major reason men go to the doctor. We are talking about billions of dollars of medical costs. And then from a neuro-biological point of view, attention deficit hyperactivity disorder, some learning disabilities, social behavior disruption. It causes the brain of a young animal to look like a senile, aged adult, old person, and is part of impaired memory. This chemical is related to many of the epidemics in the world — diabetes, obesity, neural behavioral problems, reproductive abnormalities, decreases in fertility, early puberty in girls.

That is such a staggeringly small drop in an Olympic-sized swimming pool, and it’s causing breast cancers.

Di(2-ethylhexyl) phthalate (DEHP) is a high production volume chemical used in the manufacture of a wide variety of consumer food packaging, some children’s products, and some polyvinyl chloride (PVC) medical devices. Very few studies have examined the health effects of phthalates on humans. In lab animals, phthalate exposure has been found to be associated with numerous reproductive health and developmental problems such as:

Early onset of puberty, interfering with the male reproductive tract development, interfering with the natural functioning of the hormone system, causing reproductive and genital defects, lower testosterone levels in adolescent males, lower sperm count in adult males. Phthalates are weak endocrine disruptors and androgen blocking chemicals. This means that when absorbed into the body phthalates can either mimic or block female hormones, or in males, suppress the hormones involved in male sexual development. Phthalates cross the placenta!

Phytoestrogens are naturally occurring substances in plants that have hormone-like activity. Examples of phytoestrogens are genistein and daidzein, which can be found in soy-derived products.

Addition to the article and comment from my side :

Plastic containers usually have on the bottom a recycling or identification code, based on it you can easily recognize the kind of plastic!

Remember : Number 2, 4 and 5 are harmless!!! The other ones contain different kind of endocrine disruptors!

Anything stored in those containers or plastics can lead to above mentioned diseases. It is certain, it is an indirect food additive and should have listed as a component (ingredient) of our food.

If you want it more in detail, then read more here: