First of all, how to recognize a GOOD oil : 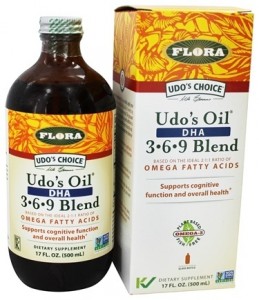 Damage done to cooking or seed oils which you buy in a supermarket : 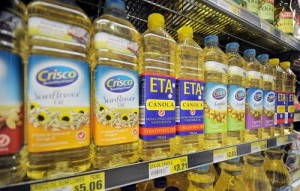 These processes are done to extend the shelf life of the oils, those oils are toxic to the body and cause great damage!

Most of the oils are furthermore sold in plastic bottles (chemicals from the plastic will leach out into the oil)!

A similar process is made with soybeans, read here :

Why Rancid ‘Healthy’ Oils Are More Dangerous Than the Bad Oils

People tend to thoughtfully consider the nutritional value of the cooking oils that they choose, but the rancidity of oils is actually of greater importance. Whenever an oil is heated enough, it undergoes a chemical breakdown, which leads to it becoming rancid. The heat-induced process sometimes transforms healthy oils into dangerous oils. This happens regardless of the original nutrient content.

Every oil has a smoke point. This is the temperature at which the nutritional content of an oil begins rapidly degrading. The smoke point is when oils become harmful, and it is when they begin actually emitting smoke, which is often more toxic than the destroyed oil. Every time an oil is reused, its smoke point temperature is lowered, because it has already undergone some break-down from previous uses. The reuse of oils is one of the main reasons why eating at restaurants is discouraged, because the oils will be bad in even restaurants that purchase healthy oils. Although, it is not often that they do.

Canola oil is always the worst choice, because it becomes toxic long before it reaches its smoke point. This is information that has been somewhat obscured from public view. We are outraged about the situation with canola, and its wide-scale promotion by Whole Food’s Market, which also promotes hormone-destroying soy as well. The high rates of lung cancer in China are largely due to the use of canola oil and rapeseed oil, despite the country’s low cigarette smoking rate. “Vegetable oil” once referred to corn oil, but now it usually refers to soybean and canola oil; so beware whenever you see “vegetable oil” on a label.

The low smoke point of flax seed oil is the reason why we recommend avoiding most so-called “healthy” foods that include flax. Flax oil becomes rancid much faster than other oils when exposed to heat, light, or oxygen. Thus, those ‘healthy’ flax-enriched foods are likely to destroy the arteries faster than anything else, and to eventually cause cancer. We still recommend flax oil supplements, but only when the oil has been properly cold-pressed, and packaged to protect it from heat, light, and oxygen. The same rancidity issues are also true for other oils that are high in omega-3. Omega oils are very unstable, so baked goods that boast about containing omega-3 are always rancid and should be avoided.

We recommend peanut oil for high-heat cooking, and olive oil for everything else. By high heat, we mean such temperatures that may be obtained from cooking in a wok or a deep fryer. Both olive oil and coconut oil are known for their health benefits and nutritional value, but both need lower temperatures. Coconut oil should only be used in low heat or no heat recipes.

If you are searching for something like butter, then simply use butter. Butter is actually a healthy substance that is full of fat-soluble vitamins and minerals which are difficult to obtain from other sources. The best type of butter is organic, unsalted, yellow butter, which is more nutrient dense than standard butter. Natural butter, in moderation, will do much more good than harm; contrary to what your doctor may have told you. Butter can be used whenever extreme heat is not required. Never use margarine or other artificial fats. Margarine is a butter imitation that was created by the chemical industry, and it is largely responsible for the soaring rates of heart diseases, which natural saturated fats like butter have been blamed for.


Whenever an oil is heated too much, it passes through a chemical breakdown, which causes it to become rancid. The heat-induced process can turn healthy oils into dangerous oils (creates health-threatening substances). Therefore, only fat/oil with a high smoke point should be heated high.
The smoke point depends on the length of the molecular chains. The longer the molecular chain, the higher the smoke point. Short chain fatty acids, for example, butyric acid in butter fat or even free fatty acids in pure fats and oils lead to low smoke points! 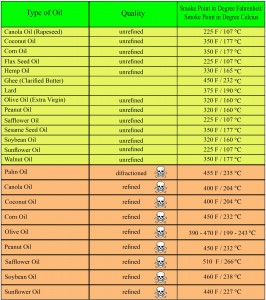 Oils marked as refined are the standard versions that are sold in most grocery stores and treated with above mentioned processes. Please note that canola, soy and corn oils are furthermore genetically engineered.